Wayne State will hold the Spring 2022 graduation ceremonies May 7.

The ceremonies will be livestreamed at www.wsc.edu/watch-live.

The graduate ceremony will feature an invocation by President Rames; Carter “Cap” Peterson, a member of the Board of Trustees of the Nebraska State College System, will bring greetings from the board; and master’s candidate Kiara Rose Hochstein of Wayne will deliver remarks.

The undergraduate ceremony will feature an invocation by bachelor’s candidate Nallely Sofia Maldonado of South Sioux City, Neb.; Carter “Cap” Peterson, a member of the Board of Trustees of the Nebraska State College System, will bring greetings from the board; Dr. Mark Hammer, professor of biology, will receive the State Nebraska Bank & Trust Teaching Excellence Award; and Robert Steele, mayor of Grand Island, will receive the Alumni Achievement Award and deliver remarks.

Processional: “Pomp and Circumstance” (Edward Elgar)
A Touch of Brass

Musical Selection: “My Spirit Be Joyful” (Johann Sebastian Bach)
A Touch of Brass

*Processional: “Pomp and Circumstance” (Edward Elgar)
A Touch of Brass

Hochstein plans to continue enhancing her skills as a corrective exercise specialist to make a positive impact on the patients and athletes she works with, as well as pursue educating students at the collegiate level.

Undergraduate Invocation
Nallely Maldonado of South Sioux City, Nebraska, will deliver the invocation for the undergraduate commencement ceremony. She is graduating with a bachelor’s degree in Elementary Education with a Reading and Writing endorsement. Maldonado earned a 4.0 GPA and was on the Dean’s List all four years of her WSC education.

After graduation, she will begin her teaching career at Irving Elementary in Sioux City as the 2nd grade Spanish teacher. She also plans to continue her education by pursuing her master's degree. Most importantly, she plans to continue working hard to accomplish all of her dreams.

Maldonado is the daughter of María Santos and Ramon Maldonado of South Sioux City. She is married to Horacio Vallecillo. 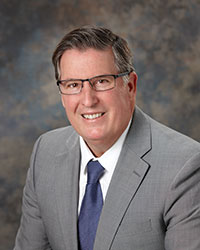 Roger Steele will receive the Alumni Achievement Award from the Wayne State Foundation during the undergraduate commencement ceremony. He graduated from Wayne State with a bachelor’s degree in pre-law studies in 1979.

Steele was born in Bassett, Neb., and graduated from high school in Pierce, Neb. He attended Creighton University School of Law from 1981 until 1984, when he received his J.D. degree. Steele’s areas of practice of law include representing insurance companies, businesses, private individuals, and school districts.

Steele was elected to the Grand Island City Council in 2014. He was elected mayor of Grand Island, a city of 53,135 residents, in November 2018. As mayor, Steele has directed an historic amount of public works for his growing city. Additionally, he has worked with Wayne State to develop a cooperative education program, which will allow WSC students to take paid internships in Grand Island businesses during the students’ senior year. This program has enthusiastic support from Grand Island businesses because they want the opportunity to hire hard-working Wayne State students.

Steele and his wife, Liana, practice law at Steele Law Office in Grand Island. They have twin daughters, Leslie and Laura.

During his Wayne State career, Karr advised the Chemistry Club, Rodeo Club, College Republicans, and was co-advisor of the Science Fiction Club. He served on the Faculty Senate and various campus committees.

Karr is a member of the American Chemical Society, the Nebraska Academy of Science, and the American Association of University Professors.

“The most rewarding aspect of working at Wayne State College has been interaction in both the classroom and laboratory with the wonderful Wayne State students,” Karr said.

Meyer served as the co-director of the Students Pursuing Occupations Related to Sports (SPORTS) Club and a volunteer with the American Volleyball Coaches Association. Before coming to Wayne State College, he served as an associate athletics counselor at the University of Wyoming from January 1997 to August 2001.

“I have greatly appreciated the rewarding experience of working at Wayne State where I could teach students and they could apply those lessons immediately outside the classroom,” Meyer said.