Bigelow has been in the psychology field for more than 60 years, still serving clients in his private practice. 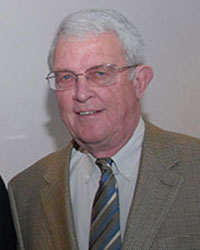 Brad Bigelow graduated from Wayne State College in 1957 and earned a master’s in education/clinical psychology in 1958 and doctorate in 1964, both from the University of Nebraska-Lincoln. Ever since then, he has been helping others and changing lives throughout the state of Nebraska.

Bigelow served as the guidance counselor at Lincoln Northeast from 1959 to 1960. He became the first psychologist for the Nebraska Penal and Correctional Complex in 1960 and served as the chief psychologist until 1968. He co-hosted a one-hour monthly TV series, “The Prisoner Speaks,” and originated Project Youth, a panel of inmates that spoke to various schools and civic and religious groups around the state.

Bigelow later served as psychologist and program director at Kearney Youth Rehabilitation and Treatment Center from 1968 until retirement in 1998. He also created the State of Nebraska Evaluation Program for pre-adjudicated adolescent male offenders.

Even after his formal retirement, Bigelow has continued his private practice, serving as a psychological consultant to Vocational Rehabilitation Services, the courts, Social Security Disability, Veterans Affairs, Mosaic Developmental Disabilities, and the Department of Health and Human Services. He has also served as a supervisor for mental health practitioners in Hastings and North Platte.

Bigelow was the co-founder of the Kearney Friends Program (Big Brothers Big Sisters); co-founder and board member of Campus House Group Home for Girls; co-founder and former president of Nebraska Juvenile Justice Association (recipient of the association’s Service to Youth Award in 1986 and 1998); and cofounder, former president, and current member of South Central Behavioral Service. He presently serves on the Buffalo County Mental Health Board and previously served on the Governor’s Behavioral Health Oversight Committee.

His practice covers the entire state of Nebraska. He is one of only a few psychologists who sees referrals in their home. To his knowledge, Bigelow is the longest practicing clinician in the state, having performed in excess of 30,000 evaluations during his career. He continues to enjoy the rewarding challenge, as well as agency and client relationships that he has developed over the years with no plan to discontinue his practice as long as his health permits.

Bigelow was presented the Wayne State Alumni Achievement Award in 2011 and is a trustee for the Wayne State Foundation. He also established the Brad Bigelow Endowed Criminal Justice Scholarship at Wayne State. He enjoys meeting his student recipients each year and hearing their stories. Bigelow’s wife, Karen, attended Wayne State, graduated from UNL, and was an elementary teacher for 30 years. Brad and Karen’s family includes a daughter and son-in-law, Lisa and Jeffrey Kurtz, daughter LeAnn Welsh, and five grandchildren.