Andrea Stava '06 holds a bachelor's degree in sports management from WSC and is now the assistant general manager of operations for Omaha's minor league baseball team. 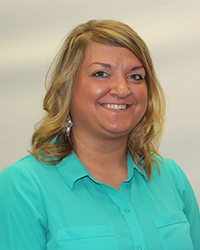 Andrea Stava ’06 is a graduate of Wayne State College with a degree in sports management. Stava was initially the assistant girls basketball coach for the West Point High School Cadets. She joined the Omaha Storm Chasers minor league baseball organization as an intern in 2005 and was hired full time in the fall of 2006.

From 2007 to 2010, Stava was the top producing group sales executive during the team’s transition from Rosenblatt Stadium to Werner Park. Stava was named director of community relations in 2012, focusing on the team’s community relation efforts, including the Chasers’ FUNdamentals baseball program and the club’s foundation, Chasers Charities.

Stava played a big part in organizing the 2015 Triple-A All Star Game week at Werner Park. She is currently the assistant general manager of operations for the Storm Chasers.