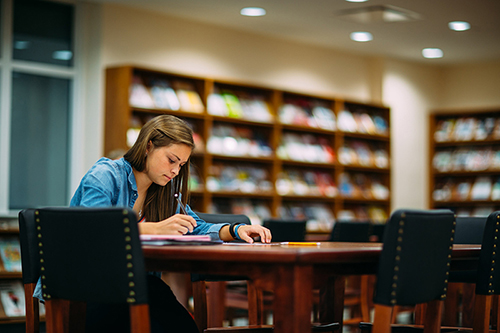 The need for attorneys in rural Nebraska is greater than ever. The Rural Law Opportunities Program (RLOP) is a special partnership between Wayne State College and the University of Nebraska-Lincoln designed to meet this need. The current shortage of attorneys requires those who need legal services to drive hundreds of miles for matters such as real estate transactions, wills, and business needs. The RLOP program recruits and educates students from rural Nebraska to become lawyers who will return to rural communities and practice law. Participants in the program receive their bachelor’s degrees at WSC and are then guaranteed admittance into the Nebraska College of Law.

To be considered for RLOP, students must meet the following criteria:
•    Be a rural Nebraska resident
•    Have applied and been accepted to Wayne State College
•    Demonstrate strong academic potential

Learn more about the program at www.wsc.edu/rlop.

As a volunteer, Worthing has worked at the Henry Doorly Zoo and at the Iain Nicolson Audubon Center at Rowe Sanctuary on the Platte River. She also volunteers with her local Catholic church, Bravehearts Equine Therapy Center, and with activities held throughout the Arthur community.

Worthing is currently serving terms on the Governor’s Youth Advisory Council, Representative Adrian Smith’s Youth Council, the Henry Doorly Zoo’s leadership team and SeaWorld’s National Youth Council. She is one of the 2019 Nebraska Youth Senate delegates to Washington, D.C., and will also represent Nebraska at the American Legion’s National Oratorical Contest in Indianapolis. In addition to receiving the Outstanding Youth in Civics Award from the Joe Foss Institute and Justice Sandra Day O’Conner, other honors include receiving the Prudent Spirt of Community Award and being a finalist for the ServeNebraska’s Step Forward Award. Worthing has competed at the FFA National Competition with research on milkweed and honeybee advocacy. Audrey is a four-time national champion in advocacy and career exploration speaking for FCCLA and an academic all-state awardee and finalist in persuasive and informative speaking for Class C-2. Worthing has earned a world champion title in trail riding and has been listed in the top 10 world rankings in western riding, showmanship, and horsemanship at the Appaloosa Youth World Competition.

Worthing is the daughter of John and Staci Worthing.

He served as a volunteer running the school’s scoreboard at all junior high and junior varsity events. He has been a First Friday Eagle Pride presenter and teacher assistant, and he assisted with hosting events at the school. In the community, he volunteered at Sunrise Country Manor in the activity department, Totus Tuus youth camp, and Teens Encounter Christ retreats.

Kenney is the son of Rose and Justin Kenney.

Kjell Marsden of Stromsburg plans to double major in political science and criminal justice at Wayne State College. He is a graduate of Cross County High School in Stromsburg.

Marsden played football, earning a letter for three years, along with being selected for second team all-district his senior year. He also participated in quiz bowl, one act, basketball, concert band, and Cougar buddies. His honors included National Honor Society and being named to the honor roll for all four years.

Out of school he has served as an NSAA soccer official for four years. Also outside of high school, he and a small group have excelled with a small business of pumpkins, gourds and firewood sales.

Marsden is the Son of Roger and Lorri Marsden.

Ethan Wright of Norfolk plans to major in political science and minor in philosophy and pre-law. He graduated from Norfolk High.

His honors include participating in Capitol Forum on America’s Future held at the Capitol, being included in Heartland Athletic Conference All-Academic Team, and varsity lettering in tennis and concert band.

Wright is the son of Shanna and Chad Wright of Norfolk.

Kyle Jedlicka of Schuyler plans to major in criminal justice and minor in public affairs at Wayne State College. Kyle will graduate from North Bend Central High School in the spring of 2019.

Jedlicka is the son of Glen and Becky Jedlicka.

Reiter is the son of Steve and Julie Reiter.