"Vengeance is Mine," a psychological horror story, was published in May 2017. 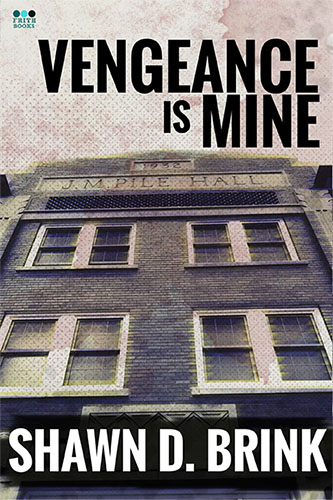 Shawn D. Brink graduated from Wayne State College in 1995 with a B.A.E. in secondary education. His passion has always been writing fiction, something he has done pretty much since he was old enough to hold a pencil. His dream: to become a published novelist.

In 2013, that dream became reality with the release of his first novel, “The Space Between” (Christian/fantasy/apocalyptic thriller). That novel, due to its popularity, became the first in a trilogy, with “The Devil’s Revenge” (2015) and “Hell on Earth” (2016). Then, in May 2017, Frith Books (a British publisher) released “Vengeance is Mine,” a 10,000-word psychological horror novelette set entirely in Pile Hall on the Wayne State College campus.

Brink’s idea for “Vengeance is Mine” was conceived back in the spring of 1995 while he was student-teaching in Wayne. Everyone at the college was leaving for spring break, and the dorms were closing, but Brink had to stay on campus to teach at the local public schools. Fortunately, the resident director of Pile Hall gave him permission to remain in the dorm as long as he kept a low profile and made sure to keep the doors locked.

A massive blizzard hit that night, prompting snow days for the rest of the week. He was snowed in, all alone in Pile Hall, with little to do and few people knowing where he was. The old dorm, he discovered, was actually a noisy place when you’re the only one around to listen. Dripping faucets, groaning radiator pipes, and other latent noises of unknown origin haunted him during those days of isolation. This was when the seeds for “Vengeance is Mine” were planted.

Now, over two decades later, those seeds have grown into an intriguing tale of horror. “Vengeance is Mine” is available in the United States on Kindle and Nook. Brink hopes others enjoy reading the story as much as he enjoyed writing it.

To learn more about Shawn D. Brink, his writing, or how to purchase his books, please visit his website. Brink is also on Facebook and Twitter.