Paul Eaton was inducted into the Nebraska Baseball Hall of Fame earlier this year. 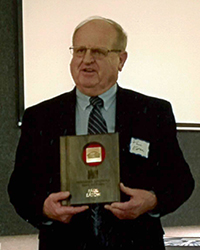 Paul Eaton ’71 of Wakefield was inducted into the Nebraska Baseball Hall of Fame at this year’s banquet Feb. 12 in Beatrice.

Eaton coached the Wakefield Post 81 baseball team from 1967 to 2016, leading the team to 18 state championships and finishing runner-up seven times, with a total of 25 state tournament appearances from 1969 to 2010. In 1990, Eaton’s team received second place in the All-Class Tournament
and were All-Class Champions in 1995, qualifying for nationals at Mid-South Region in Gonzales, La.

In 1980 and 1983, Eaton was selected to coach the Nebraska American Legion All-Star Series, and in 2014, coached the Nebraska Kiwanis All-Star Game. He was selected USBF/Topps Nebraska Amateur Baseball Coach of the Year in 1995 and was presented the Ak-Sar-Ben Good Neighbor Award for his work with Wakefield Youth Baseball in 1974. In 1984, the City of Wakefield named the Wakefield baseball field Eaton Field.

In addition to coaching, Eaton has also started a number of traditions connected with baseball in Northeast Nebraska. He initiated the Chuck Ellis Memorial Tournament (45th year), the Max “Bud” Greve Wood Bat Tournament (22nd year), and the Merlin “Lefty” Olsen Mid-Summer Classic (30th year) to make baseball fun for kids and give them the opportunity to play the game. For the past 50 years, Eaton has worked and taken care of the baseball facilities to help make improvements. He also chaired the committee that planned and secured funding to build three new playgrounds. He is currently the chairman of the Graves Park Forever Committee, which works on projects to “make a great park even better.”

Eaton and his wife, Janelle, live in Wakefield.