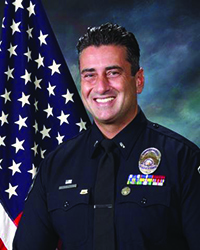 Stella has worked a variety of assignments, including patrol, gangs, the Narcotics Unit, Drug Enforcement Agency (DEA) Task Force as an officer, Investigations Division, and the SWAT Team. He has also supervised patrol teams and the Investigations Division and is currently in charge of patrol division, SWAT Team, and K-9 Unit, and is the Press Information Officer.

Influential in creating a number of department “firsts,” Stella helped create the Cold Case Homicide Unit, which has solved six previously unresolved homicides. He also created the department’s Awards Program, SWAT Tactical Explosive Breaching, and “Request-A-Training,” a training partnership between the police department and the community.

Stella is a former “Officer of the Year” and was part of a SWAT entry team honored with a National Valor Award for successfully rescuing a hostage from an armed gunman. He has also developed and executed numerous large-scale operations and nuisance abatements that improved the community’s quality of life.