Scott Mueller holds a bachelor's degree from UNL and an MBA from Wayne State. 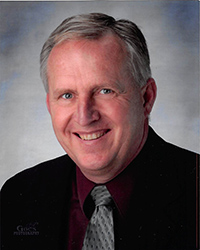 Scott Mueller (MBA ’00) of Columbus, started out on the family farm with his father, Walt, his brother, Bruce, and his brother-in-law, Duane Brakenhoff. He graduated from the University of Nebraska-Lincoln in 1979 with a Bachelor of Science degree in animal science.

Over the next seven years, Mueller worked on the farm and served as a member of local and state cattlemen associations, local and state church organizations, and various community boards. In 1986, Mueller was selected to participate in the Nebraska LEAD Program. Also that year, Mueller began his journey into business ownership with Samson, Inc., a farm and feedyard operation.

Since then, Mueller has developed business relationships with agricultural production and service companies. Mueller provides accounting services for his wife, Patricia, who owns Traditions Inn in Columbus. He is also a part-time bartender. Mueller was selected as the Columbus Area Chamber of Commerce's Young Farmer of the Year in 1994, Agribusiness Pioneer of the Year in 2009, and the 2013 Archway Business Man of the Year. His company, Samson, LLC, was recognized as the 2015 Nebraska Small Business of the Year.

Mueller was a part of a group that purchased the New World Inn and Conference, which was fully renovated to become the Ramada-Columbus and River's Edge Convention Center, of which Mueller is the managing member.

Mueller has two sons, Brandon and Jordan, who also play valuable roles in the core businesses.