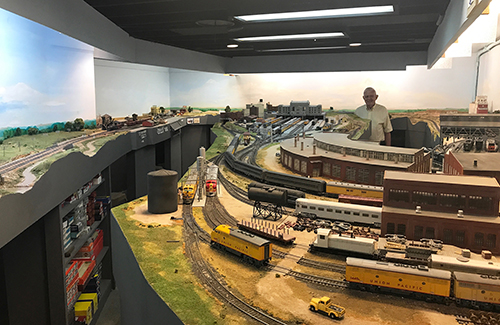 Dr. James Budde ‘62 has always been fascinated with trains, their history, and how their operation has evolved. After he and his wife, Jane, built their home in Lawrence, Kan., in 1991, his passion developed into an elaborate, museum-quality, 50-by-22-foot model train layout in their basement.

Budde, who received his bachelor's degree in business education and minored in art at WSC, used his artistic talents and vast knowledge of trains to piece together the intricate details of his trains, tracks, buildings, and landscaping, and also painted scenic landscapes in the background to complete the space. Budde’s model train layout has taken him 23 years, beginning in 1994, and he continues to make upgrades.

A small computer is used to operate trains simultaneously on the same tracks and also synchronizes the sound from various locomotives. The sound comes from small speakers in the locomotives. This digital sound was recorded from real locomotives. 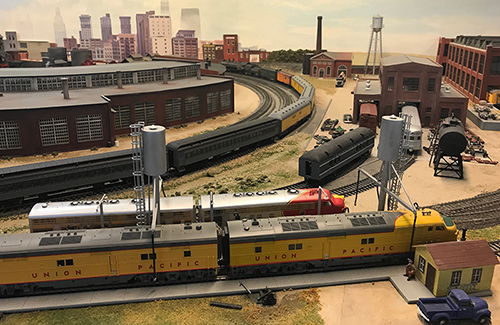 Kansas City Union Station is located on a peninsula and includes eight passenger tracks in addition to the coach yard and service tracks, with a post office, diesel and car shops, commissary, and other buildings nearby.

Budde’s model is built high enough to provide more eye-level viewing. Most structures are kit-bashed and based on the prototypes. The backdrop is artist quality with large storm cloud formations.

Budde enjoys demonstrating his layout and trains for visitors while also providing them with a history of the railroads and their role in the area in 1951. The layout is primarily for passenger trains, so each train is made up of car models that were used in real trains.  All of the automobiles, signs, and other features on the layout also reflect the period.

Jim and Jane are new trustees of the Wayne State Foundation and enjoy coming back to campus for Homecoming events. They also recently established the Dr. James Budde and Family Endowed Scholarship.

Budde also holds a master's degree from the University of Nebraska-Omaha and a doctorate from Kansas University. Before enrolling at Wayne State, Budde served in the U.S. Army for 16 months in Korea. Much of his career has been serving individuals with disabilities, focused on human service systems.