Diez has also served as the chair of Engineering Technology Department at Western Illinois University and as a department chair at the University of North Dakota. 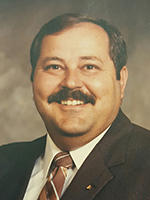 The Association of Technology, Management, and Applied Engineering (ATMAE) recently appointed Dr. Clayton Ray Diez ’72, MSE ’79, as its first Senior Fellow for History. The Senior Fellow Program was started to honor leaders in the field who have served ATMAE with distinction while utilizing their skills to further specific goals within the association.

ATMAE is an accrediting body, setting standards for academic program accreditation, personal certification, and professional development for educators and industry professionals involved in integrating technology, leadership, and design. It was formerly known as the National Association of Industrial Technology (NAIT).

Diez has served as the chair of Engineering Technology Department at Western Illinois University since 2009. Before that, he was an assistant and associate professor for 24 years at the University of North Dakota as well as a department chair there. He received his doctorate degree from the University of Northern Iowa in 1990 and was a visiting professor at National Kaohsiung Normal University in Taiwan in 2006. He was also named a Rotary International Paul Harris Fellow in November 2015.

With this appointment, Diez will develop a history of ATMAE to be used in the celebration of their 50th anniversary at the 2017 conference in Cincinnati.

Diez held many positions for NAIT as well as ATMAE. Most recently, he served on a special ad hoc committee to review ATMAE’s bylaws. He also served as ATMAE’s Board of Accreditation chair. Previously, he held leadership positions of NAIT as President of the NAIT Student Division and as a regional director. In 1994, Diez was named Outstanding Regional Director at ATMAE’s 28th annual conference.

In service to the industry, Diez served as Director of Region IV and Chair of the Board for Epsilon Pi Tau, the International Honor Society for Professions in Technology. He also served as a professional education consultant and evaluator for numerous education programs. Diez has assisted dozens of corporations as an industrial consultant across the Midwest.

In addition to his vast research background and contributions to innovations in teaching, Diez has won numerous awards. He was initiated into the Mississippi Valley Technology Education Conference, one of 65 active members in a selective membership. He received the Foundation-McDermott Award for Individual Excellence in Teaching at the University of North Dakota. He was named Outstanding Regional Director and received the Outstanding Professor Award for Region II by the National Association of Industrial Technology. Diez also received the UND Memorial Union Outstanding Advisor Award.

The ATMAE Senior Fellow for History appointment began in March 2016 and culminates with the annual conference in 2017.