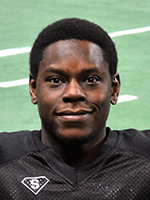 After a three-year standout career with the Wayne State football team from 2007-10, Frederick Bruno ’12 is recording impressive numbers with the Sioux City Bandits as a wide receiver and kick returner.

Bruno graduated from WSC in 2012 with a bachelor’s degree in Criminal Justice. His wife, Katie (Bartels) Bruno, also graduated with a criminal justice degree in 2010, and received her master’s degree in clinical mental health counseling in 2014. They married Oct. 1, 2016.