Armstrong replaces Phyllis Conner, who retired in January, as leader of the Wayne State Foundation. 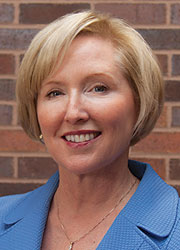 Phyllis Conner, vice president for development and executive director of the Wayne State Foundation, retired in January. Conner had led the foundation since returning to the college in 2003.

Kevin Armstrong, who has served as the director of planned giving for 11 years, assumed leadership of the foundation in January. Armstrong will have a new title of Chief Executive Officer, though his duties will closely mirror those of Conner. The Wayne State Foundation Board of Trustees has expressed complete confidence in Armstrong’s ability to lead the foundation.

A message from Armstrong

This year marks the 55th anniversary of the Wayne State Foundation. From awarding $1,200 in scholarships in 1962 to more than $2.3 million in 2015, there is no question that the Foundation has developed into a powerful engine of support for Wayne State College. This year will be no different.

We find ourselves at the dawn of a new era, in more ways than one. This is my first year as the Chief Executive Officer of the Foundation, and this is the first year for Wayne State’s new president, Dr. Marysz Rames. Together we have created a list of resolutions and goals, and we are excited to involve all of our alumni, friends and the campus community in our drive to achieve them. Never in our history have we had so many opportunities in front of us.

Even though the new year brings change, many things will remain the same. Please rest assured that the foundation will always strive to be good stewards of your donations, which allow us to provide critical private support to the college to further enhance the exceptional student development and regional service that has taken place since 1910.

I offer my sincere gratitude to anyone and everyone who has ever played a role in making the Wayne State Foundation and Wayne State College what it is today. It could not have been done without you. I look forward to many more rewarding years to come.