Dr. Dave Whitt '89 and his colleague delivered a TEDx talk on the topic "Happiness is Serious Business." 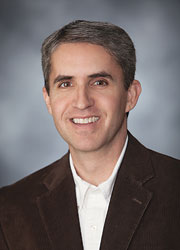 Dr. Dave Whitt ‘89 is a professor of communication studies at Nebraska Wesleyan University in Lincoln, where he has taught since 1991. He teaches classes in persuasion, mass media, communication in the professions, and Songs of Ascent: The Music and Meaning of U2. He received the WSC School of Arts & Humanities Distinguished Alumnus Award in 2014.

Whitt and colleague Karla Jensen participated in TEDx Lincoln held at the University of Nebraska-Lincoln in October. Their topic was “Happiness is Serious Business.”

How did you come up with your topic for the TEDx talk?
Karla Jensen, one of my communication studies colleagues, and I were selected as the co-sponsors for the Nebraska Wesleyan senior class in 2012 and gave the Senior Class Charge at the baccalaureate ceremony the morning of graduation. Our tag-team speech was titled “Follow Your Bliss.” We discussed the science of happiness and tied it to our personal interests, which, for Karla, was yoga, and for me, attending concerts, particularly those by the Irish rock group U2.

When did you decide to try out for a TEDx talk?
After the baccalaureate ceremony, another of our communication colleagues suggested we turn our speech into a TED talk. We didn’t really think anything of it until last spring when we decided to apply to TEDx Lincoln because of their theme “Think.” The idea was to take our original “Follow Your Bliss” speech but update it with new content. Our goal was to encourage everyone in the audience to think about the science of happiness and to pursue happiness in their life. My individual “solo” would again focus on U2, but for TEDx I had more time to explain the joy I experience seeing them live and how this eventually led to teaching a class about U2 at Nebraska Wesleyan.

What was the process like and how did you prepare?
The process started in April 2015 when we applied online to be TEDx Lincoln speakers. There were approximately 75 applications that were narrowed down to 40. Next, we had to send in a five-minute video explaining our topic and how it related to the TEDx theme. The top 15 were then brought in for a personal interview with the TEDx committee. After this rigorous process, we were informed over the summer that we had been selected. Our first draft was over 15 pages long, which we slowly cut down to eight to make the 10- to 12-minute time limit. A few weeks before the event, we began practicing and would work on our speech 30 minutes or more each day so it was memorized.

What was the most valuable takeaway from the TEDx talk?
The speakers and topics were absolutely amazing. The whole experience was memorable, emotional and exhausting, but in a good way. I would encourage anyone who has a story to tell, or has unique insight into an event, to think about turning it into a TEDx talk. There are TEDx events in cities across the United States and around the world.

Is your TEDx talk online?
It’s posted on YouTube. You can type either “Happiness is Serious Business” or “Dave Whitt,” and it will take you to our video.